Amplifying the voice of the GFAA program is achieved through our marketing and communications committee.

We are always open to new team members and welcome individuals who share our mission, vision and values.  If you are interested in learning more, please email Eleanor Goldhar, Communications Chair

She works with both non- and for-profit companies, and individual clients, in the U.S., Canada and Europe. She led the public re-launch of the Onassis Cultural Center New York featuring music, philosophy, and exhibitions of contemporary art and archaeological antiquities, including programs in other major New York City cultural venues.

Educated at York University and the University of Toronto, Goldhar is an accredited member of the International Association of Business Communicators (IABC), from which she received the Gold Quill Award for Excellence.

Zaldívar started his film career as a sound editor and designer, his work can be heard in Academy Nominated films such as Ang Lee’s “Sense and Sensibility;” “On the ropes” and on HBO’s America Undercover, for which he garnered an Emmy nomination.

His film and video art works have screened at many festivals worldwide and broadcast on PBS, ABC, IFC, Showtime and WE. He is the recipient of numerous grants and awards. His directing credits include “90 Miles” (PBS), “The Story of the Red Rose” (Showtime), “Palingenesis” and “Soldiers Pay” (IFC), co-directed with David O. Russell (Three Kings, The Fighter) and Tricia Regan (Autism, the musical).

He has served as a Juror for several major film festivals including the Sundance International Film Festival. He is a Sundance Film Institute alumnus. He has recently co-founded the Miami Filmmakers Collective with a generous grant from the John S. and James L. Knight Foundation Art Challenge grant and a matching grant from the Dade County Department of Cultural Affairs.

His current projects and recent accomplishments include:

• is producing a feature-length art film.

Carolyn Cruz is an integrated marketing professional with over 20 years of experience managing global corporate brands for industry leaders including Gap, Apple, Bank of America and Sun Microsystems.

Her background in advertising and brand marketing includes both client and agency-side roles. She has extensive expertise in developing and producing national and global on-line and print advertising campaigns, in store materials, as well as managing global events. Carolyn has much experience managing both creative and media agencies.

Her career has taken her from San Francisco to NYC, and she now lives in London where she pursues her passion of arts and culture.

Carolyn speaks Spanish fluently and holds a Bachelor of Arts degree with a double major in Communication Studies and Sociology from the University of California, Santa Barbara.

Natasha Gural is a professional writer and editor of long and short form journalism, cultural and art analysis, white papers, book proposals, ghostwriting, marketing, sales and investor relations materials. She is a multiple award-winning editor, reporter and writer with 20 years of experience in magazine, digital, wire, newspaper and multimedia journalism, including the successful launch of a magazine and multiple websites.

Ms. Gural is currently an art writer for Forbes: Forbes Fine Art & The Business of Art

Her experience also includes over a decade of management experience including running newsrooms and working closely with top executives on strategy and business development. She works closely with C-suite executives and key decision makers in client-facing roles.

Other creative projects include Lubacka, the novel, based largely on her Russian mother’s early childhood as a prisoner in Nazi concentration and work camps in Poland and Germany and a displaced persons camp in Germany.

Ms. Gural is a graduate of Oxford University and lives in New York City.

Cornelia Lauf  is an art historian and curator based in Rome, Italy.   She earned her Ph.D. at Columbia University, and holds a B.A. from Oberlin College.

Dr. Lauf was formerly the editor-in-chief at Imschoot, Uitgevers, in Belgium; she co-founded Three Star Books, Paris (2005-2015), and has produced many publications with contemporary artists.  She has lectured at Centre Pompidou; Dia Center for the Arts; Getty Center for the Arts and Humanities; Tate; Museum of Modern Art; and Musei Civici, Venice, among others, and has taught at LUISS; IUAV, Venice, and is currently Visiting Professor at John Cabot University, Rome.

Her specialty is commissioned projects involving the artist, client, fabricators, and institution.  For these projects, she has managed the production and installation of many unique, and often functional, works of art.

She began her career in marketing at The New Yorker magazine and subsequently worked for a number of technology start-ups. Ms. Meyer previously lived in London for nine years, specializing in Business Development for several art media companies including Art Asia Pacific Magazine, Louise Blouin Media and Art World magazine.

Ms. Meyer has a BA from Lehigh University and an MBA from Fordham University. She is on the boards of the Queens Botanical Gardens and The Waterfront Center, and is an active member of ArtTable and POWarts.

A native of Hungary, Ms. Szanto is a Master’s candidate in Arts and Culture Management at King’s College London. She received her BA in Art History and Comparative Literature student at the University of St. Andrews, where among other activities, she was a columnist for the school magazine and contributing writer for their art publication.

As part of her studies, she spent time abroad at Leiden University in the Netherlands, within various departments from Documentary film to Southeast Asian art.

She has volunteer and had internship experience at Christies’ London, the Scottish National Trust and St. Andrews Preservation Trust Museum.

Jenna Agres is a student at the University of Florida, pursuing a degree in Graphic Design. She is a recent graduate of Miami’s DASH, Design and Architecture Senior High.

Aspiring to incorporate her passion for design in a future career, joining the Global Fine Art Awards team as the Graphic Design Intern for over three years has been a very beneficial and rewarding experience.

Jenna enjoys the process of ideas, as well as incorporating a strong layout, aesthetically pleasing color scheme, and trending typography in her work. Aside from design, Jenna loves experimenting with new media and techniques, such as darkroom photography, India ink, and book binding.

Artistic producer, enthusiast and social media aficionado, Hogan Fritz lives in New York City where he now works for William Morris Endeavors. Previously, he completed several internships with major New York television productions, including “Saturday Night Live” and “The Late Show with Stephen Colbert.” Hogan  graduated from Marymount Manhattan College, where he received a Bachelor of Arts in Communication Studies with a minor in Journalism..

He has also worked in theatre and film and has been awarded several accolades including Finalist at the International Youth Silent Film Festival and the ACMY Theatre Awards.

Hogan’s world revolves around the arts and he takes pride in his passion for the universal appreciation and strive for a global artistic connection.

Brazilian native Felipe Gehrke is a Marketing Analyst with international experience in the creative and marketing world across three continents.

Felipe received a Bachelor’s degree in Industrial Design from the Catholic University in Rio de Janeiro in 2009 and has worked as a creative and marketing analyst since then, with experiences at Coca-Cola, Sapient Nitro Miami and Ogilvy Paris.

His most recent academic achievement was graduating from Miami Ad School in 2013 as an Art Director, a two-year program based in Miami with practical training and studying abroad.

Felipe is the winner of the 2015 GFAA new logo global contest, and has contributed significantly to the rebranding initiatives of the GFAA program. 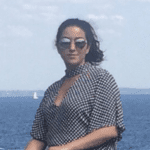 Remi Koukou, GFAA Communications and Digital Marketing Committee
Remi joined Team GFAA while working as the event coordinator for the National Arts Club.  She became Co-Chair of the GFAA Young Visionaries Committee, and is now utilizing her social media experience to direct the GFAA instagram account. A true “art girl,” she has worked for several galleries and cultural institutions, most recently Levy Gorvy in New York. Ms. Koukou is currently an Associate at Lee & Associates Commercial Real Estate. She received her Bachelor’s in Art in 2015 from Boston University, where she majored in Art History, Criticism and Conservation and Public Relations.